I’m continually inspired by women—and am always on the lookout for wonderful stories about fabulous women who are moving through the world with spunk and courage. I’ve come across a few lately, from all walks of life, whose stories make me want to cheer, say thank you, or make me smile.

So … I thought it was a wonderful time to do a shero post!

I hope you will find some inspiration in their work and their moxie, as well as find joy in their joy (see Ms. Goldman—shero in her 70s). I certainly have!

(And please don’t leave this post without scrolling down to the P.S.(and P.S.S. for two exciting writing opportunities!)

Shero in Her 50s: MacKenzie Scott

Scott, 51, became a household name in January 2019 when she and her then-husband Jeff Bezos announced on Twitter that they were separating.

Since then, Ms. Scott has kept herself very busy—by giving away her money! In March 2019, she signed the Giving Pledge, where she promised to donate the majority of her wealth. Ms. Scott took a very thoughtful and strategic approach to her giving: “I asked a team of non-profit advisors with key representation from historically marginalized race, gender, and sexual identity groups to help me find and assess organizations having major impact on a variety of causes.”

In July 2020, she shared in an open letter on Medium.com that she had already donated a total of $1.7 billion to 116 organizations. (Click on the link to see the list!) In December of last year, she’d donated $4.2 billion additional to 384 organizations, and, in June 2021, she donated yet another $2.74 billion.

In her medium.com article titled Seeding by Ceding, Ms. Scott stresses the importance of crediting the changemakers with the changes her donations will bring: “People struggling against inequities deserve center stage in stories about change they are creating. This is equally — perhaps especially — true when their work is funded by wealth. Any wealth is a product of a collective effort that included them. The social structures that inflate wealth present obstacles to them. And despite those obstacles, they are providing solutions that benefit us all.” She adds, “Putting large donors at the center of stories on social progress is a distortion of their role.”

The Giving Pledge was started by Bill and Melinda Gates and Warren Buffet in 2014. According to Caroline Hallemann in her article about Ms. Scott in Town and Country Magazine, “Thus far, more than 200 individuals, couples, and families, have signed the Giving Pledge, but one name missing from the list is MacKenzie’s ex, Amazon founder Jeff Bezos.”

Need I say more? Thank you Ms. Scott and thank you to all changemaker sheroes and heroes working hard to make this world a better and more equitable place.

Shero in Her 60s: Julianne Moore 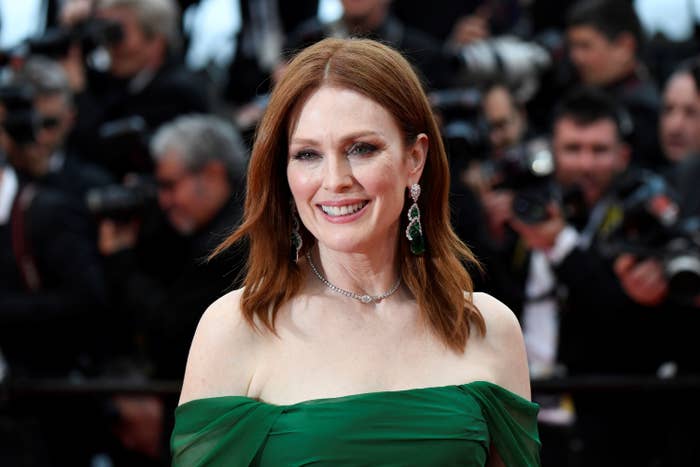 Few actors are more accomplished than Julianne Moore. Moore is widely recognized for her fearlessness on the screen and for taking on challenging roles portraying women leading difficult lives, including her portrayal of a woman with early-onset Alzheimer’s disease in Still Alice, for which she won the Academy Award for best actress.

Off the screen, Moore, who turned 60 last December, devotes a lot of her time to social justice issues. She’s an active supporter of Planned Parenthood and campaigns for LGBTQ+ rights and for gun control. She is also outspoken when it comes to ageism and its intersection with sexism—a combination she has experienced in her own illustrious screen career.

Moore has a problem with some of the common terminology about ageing.  “Ageing gracefully,” for example, is a term that gets her miffed. While it is often considered a compliment, Moore sees the term as “totally sexist” and a “compliment” reserved only for women. https://www.insider.com/julianne-moore-women-aging-gracefully-sexist-2021-7 In an interview for As If Magazine, Moore takes a deeper dive: “Is there an ungraceful way to age? … No one has an option about ageing, so it’s not a positive or a negative thing. It just is.”

Ageing with “grace” should not be the focus. “We are given a narrative as children that we keep growing through school, maybe go to college then, after school is finished, the idea of growth is done. But we have all this life left to live. How do we continue to challenge ourselves, to interest ourselves, learn new things, be more helpful to other people … how do we continue to evolve … navigate life to have even deeper experiences? That’s what ageing should be about.”

Shero in Her 70s: Gwen Goldman 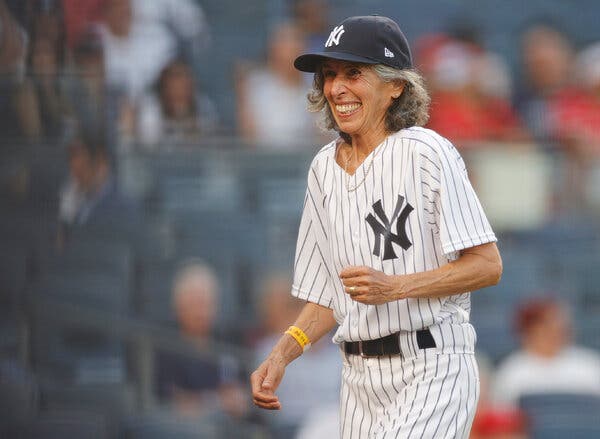 Gwen Goldman experienced a huge rejection when she was ten years old. A devoted Yankee fan, she wrote to the Yankees organization and asked if she could be a bat girl for the team.

“Girls do not belong in the dugout,” Roy Hamey, Yankees general manager in 1961 wrote back. Ms. Goldman kept that letter pinned to a bulletin board for many decades. She loved still loved the Yankees and didn’t hold the rejection against them, but her hopes of ever becoming a bat girl for her beloved team were put to bed.

Fast forward 60 years: Ms. Goldman’s daughter contacted the Yankees organization and sent them a picture of the original rejection letter. According to the New York Times, Brian Cashman, the Yankees’ general manager since 1998, sent Ms. Goldman his own letter, in which he wrote “‘a woman belongs everywhere a man does, including the dugout’ and that it was ‘not too late to reward and recognize the ambition you showed in writing that letter to us as a 10-year-old girl.’”

On June 28, 2021, in a Yankees—Angels game, Ms. Goldman got her chance to serve as Yankees bat girl. In full Yankees uniform, she even threw out the ceremonial first pitch.

Goldman had a blast. She told reporters, “‘It’s been an amazing opportunity. A day of a lifetime I can’t put into words. I don’t know where to start on which was the best … from walking in the front door of the stadium to coming up to a locker with my name on it, Gwen Goldman, and suiting up, and walking out onto the field. It took my breath away, and it’s obviously taking my words away.’”

Gwen Goldman’s words say it all! Yay for dreams coming true, shero in her 70s!

Shero in Her 80s: Diana Wiener 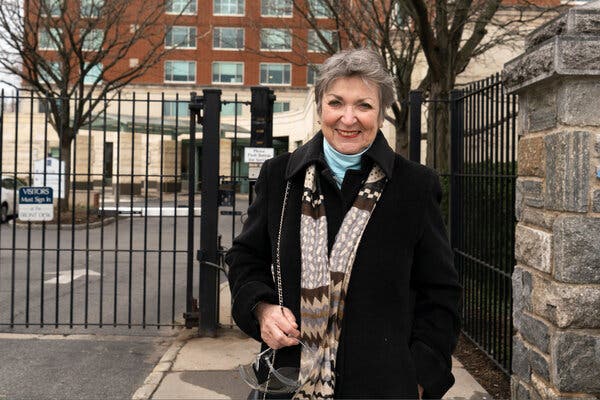 Diana Wiener saw a problem in her independent living community and stood up to the powers that be. Andrea Atkins explains in Next Avenue:

“In March 2020, Diana Wiener knew that COVID-19 was present in the Five Star Premier Residences of Yonkers, N.Y. … But Wiener, 80, was not happy about how the management was communicating with her neighbors and her about the virus—they weren’t.

When she told the building’s executive director that she would be starting a newsletter to inform residents about the pandemic, the director warned against it: “You’re going to upset everyone. They can’t understand it all.”

Ms. Wiener was angry with that response. “We are not children,” she told Atkins. “Somebody had to stand up and do something and say something.” Ms. Weiner decided that someone would be her. Voila—The Buzz: “‘It was a real challenge, and it was exciting to me to learn how to do it … It was glossy, and it was sexy looking.’”

Ms. Weiner and a few residents slipped the first issues under residents’ doors. “I shared whatever information I could find … from how to wash your hands to how to wear a mask … and why you need to wear a mask.”

Ms. Weiner, who must have been a journalist in her past life, developed relationships with “secret sources” and was able to list those who died and send well wishes to those who had fallen ill. (The building’s management refused to divulge those names.)

The Buzz also included book reviews and residents’ original poetry. This small publication inspired more activism. Other senior living developments around the US started their own newsletters after learning about Weiner’s in an article in the New York Times. Weiner graciously shared her template—and encouragement.

“You’re just never too old to do the right thing,” Weiner told Atkins. “You can remedy things—and even one person can make a difference.’”

Thank you for being that one person, Diana Weiner, shero in her 80s!

Shero in Her 90s: Melissa Freeman

Melissa Freeman is a 95-year-old physician who still maintains a medical practice in Harlem. She told Allana Haynes for oprahdaily’s “Lift Every Voice” project that she has “no thought of retiring … I still have energy, and I still plan to continue as long as I have energy.”

Dr. Freeman was raised in the Bronx in her grandfather’s house with her siblings and cousins—her grandfather wanted the grandchildren to grow up together. Family was important to him—he was born enslaved and taken from his own mother at a young age; they luckily reunited when he was freed at 11 years old.

Dr. Freeman developed an early interest in medicine and followed that passion at time when it was extremely rare for a woman, especially a woman of color, to become a physician.

Dr. Freeman began working “in the field of drug addiction, managing the use of other medication to treat people who were addicted to drugs, particularly young women … it’s very challenging to work with people, and certainly people of color, Black people, helping them to defeat the areas of medicine that have unfortunately taken us away from life … something I wanted to do and have continued to do.”

At 95, Dr. Freeman not only continues treating patients but also inspires young people to follow in her footsteps: “There’s a program that one of our friends runs every year where she introduces young people to the possibility of studying medicine. She has classes where doctors attend, and young people can come and talk with us about what we do, why did we do it, where did we do it … It helps young people to consider the advantage of taking care and healing our people who find themselves with ailments that need to be treated if we were not there to do it.”

At 95, Dr. Freeman is still working to heal others and to inspire a new generation to join her. Hat’s off to you, Dr. Freeman, shero in her 90s!

So … Sheroes come in all ages!

To paraphrase the words of Julianne Moore:  We continue to challenge ourselves, learn, grow, evolve. That’s what ageing–and being a shero–is about.

As Always, I’d love to hear your thoughts. Do you have a shero you’d like to highlight? Which women most inspire you?

And If You Know Another Amazing Woman (Or Person Of Any Gender!) Who Might Like To Join Us At WomanPause, Please Forward This Link:  WomanPause

P.S. If you are inspired by wonderful writing, I’d love for you to join me on September 13, 20 and 27 for “Mirroring the Masters,” a writing class I am offering through the New York Writing Room.

P.S.S. I’m also sooooo excited to announce that I’m adding some “Work with Me” options on my website! I’m offering book, essay, and story coaching as well as group and one-on-one craft sessions! I’d love to work with you and help you elevate your voice!