Last week, I interviewed an amazing woman–Greta Holt. A deeply devoted Mennonite, Greta’s religious beliefs inform her social activism. I became interested in learning more about Greta when I met her in a MasterMind group we both were a part of. I am grateful that our introduction at the MM also introduced me to her blog. Please join me this week in reading her thoughts about giving to those on the street. I am honored that Greta has agreed to be WomanPause’s first guest blogger. (If you have a chance, I highly recommend watching the two YouTube videos Greta linked to in the post.)

What then must we do? Panhandlers and Respect

She is skeleton-skinny, and her face has the acne marks of the heroin user. She’s clever, but she talks too fast and her eyes bore in. I ask around at church and find that she has a different story for everyone: needs cash for a bus to pick up her car, needs cash for the food bank, cash for her aunt who is waiting in a wheelchair. Should we give her the money? I did once because I had to get by her to teach a Sunday School class that was waiting for me. Those seven dollars still weigh on my mind. Some other church members say they carry discretionary money to give, and that they don’t judge how it will be spent.

The once-beautiful, young couple, their heads together and rifling through the few, dirty bills he has, scuttle past us like nervous mice. We step aside, rattled by their naked need for the next fix before the pain sets in. A gorgeous, put-together woman walks behind them, unaware. We ourselves are on our way to the opera.

Men and women with ratty signs—‘Help, God bless,’ ‘Out of work, God bless,’ and ‘Homeless, God bless’—stand at the corner of Madison and Red Bank every Sunday as we make our way home from church. Sometimes we give, other times we don’t. After all, the Great Recession is long over. During that downturn, the corners were full of people who had actually lost their jobs or homes, people who never, ever thought they would be in trouble. 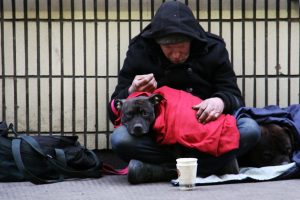 Photo by Nick Fewings on Unsplash

Proverbs 19:17—Whoever is kind to the poor lends to the LORD, and he will reward them for what they have done.

For a few weeks this year, a group of guys wearing some kind of vests and carrying boxes marked ‘Community Church’ or some such thing, moved from car to car soliciting money. They are gone in three weeks, their scam so obvious that somebody has called the police.

Coming from a Reds or Bengals game requires walking past men playing instruments, mostly badly and always ear-splittingly, and forlorn folks sitting with dented cups and sad signs. We give a few bucks to several souls. Walking to our car, we are accosted by a man who wants money and shouts angrily when we don’t answer.

A Middle Eastern couple with a child stands on a corner in an affluent suburb and asks for money. Have they been mistakenly dumped there by a bus driver?

Panhandlers—this is the stuff of the city. Religious teaching expects us to respond with generous help. Reality often warns against it.

The skeleton-skinny heroin user will buy heroin. The tall, once beautiful couple scuttling down the street are desperate for their next fix, truly desperate. At the corner of Madison and Red Bank, some of the guys and gals with their sad signs need help, some do not.

The Middle Eastern couple is an anomaly. I give them five bucks, but I don’t stop and ask them if they need me to call the Islamic temple on I-75 for help. Why couldn’t I do just that much?

Proverbs 22:22-23—Do not withhold good from those to whom it is due, when it is in your power to act. Do not say to your neighbor, “Come back tomorrow and I’ll give it to you”—when you already have it with you.

What then must we do?, asked Leo Tolstoy and the followers in Luke 3:10-11: And the crowds asked him, “What then should we do?” In reply he said to them, “Whoever has two coats must share with anyone who has none; and whoever has food must do likewise.”

1. Treat people with respect. Even if you are giving nothing, the nod of a head and/or a hello helps. Folks who have truly fallen on hard times do not want to be begging. You do not know if the person in front of you is real or fake. You and I are not God.

2. Give to your local shelter/food bank/clinic. This is the highest rated suggestion I’ve found.

3. Carry discretionary money. God is God, and we are simply people. If you feel okay about it, let God judge how the money is spent.

4. Carry McDonald’s gift cards. Someone in need will use a coupon and get a meal. Scammers may walk away without taking it.

6. If you feel safe—an important and heavy lift especially for women—eat with the panhandler in a public place and converse.

7. Only if you feel safe!!!—and you probably won’t—take the person to a shelter or clinic if he/she is willing to go.

Okay, an admission—and I happen to know plenty of other urban people who have done this crazy thing, too. One day, a few blocks from the church, a woman called to me for help. She ran up and said that her car had just failed and she had to get downtown to her job. What to do? Trembling and praying that I wasn’t going to be robbed or killed, I took that woman all the way downtown, where she could meet her son who would give her a ride to work. When we got there, I told her, straight out, how scared I was to have done this. She thanked me and said she was a Christian woman, and we went on our separate ways. How foolish of me to take her, and how ethical of me. As I write this, my husband will find out for the first time that I did it. Sigh, this stuff is not easy.

San Jin Choi, pastor of Fourth Street Community Fellowship in Washington, D.C., which is APPA, a church for the urban poor, made himself homeless for a period, then wrote: “Through my homeless experience, I decided that homeless people, though rejected or ignored by human beings, are precious people to God.‘But strive first for the kingdom of God and his righteousness, and all these things will be given to you as well,’ says Matthew 6:33. Seeking first his kingdom means restoration of his kingdom in our society. Poor or marginalized people are restored as kingdom citizens in our society.”

At the council meeting, “Supporters of the locker program asked council members to cast aside the stereotype that all or most homeless people commit dangerous crimes, abuse drugs or alcohol and have mental health issues. One woman who said she used to be homeless, talked about the physical and emotional toll of carrying all your possessions around with you when you have no place to store them.”

But there were real problems, according to neighborhood people. “They recounted finding condoms, needles and human waste in their yards or outside their businesses, waking up in the middle of the night to pounding on their doors and dealing with attempted and successful break-ins. One neighboring resident [—-] said a stranger once chased her former tenant down the street and pounded on her front door when she managed to get inside and lock the door.”

Helping people is necessary, and complicated, and moral and Godly.

In this YouTube video, an undercover newsman stands on a median and panhandles. Pay special attention to the fellow across the street, who says that he does need money because he has been in prison and can’t get a job.  Prison exacts a terrible price.

It’s messy. Ethical people cannot ignore the poor. So, we must treat people with respect, give to our food banks and shelters, make a plan for our approach to panhandlers and for our involvement in homelessness, and search for God’s will.

And each of us needs to decide our talents and our boundaries.

In our next blog, we’ll look at where we fit in to the big picture. There was a recession caused by predatory lending; there is a horrendous, intentionally caused drug epidemic. Do we have to accept that the poor are always with us? How can we help, with humility and courage, if we don’t honor our own limits?

I welcome your comments: gretaholtwriter.com/blog.

{Thank you to my niece, Addie (Liechty) Kogan, for taking the picture that is this blog’s featured image. Her blog is: https://addieswriting.wordpress.com.}

Best wishes and have a good week.

As always, I welcome your thoughts. Please post a comment or send me an email! (And Greta, I’m sure would love to hear from you too!)

See you next Monday!